Imagine a world where you have different places in it. It could be, for example, a large piece of land, with many villages on it.

Each of these “villages” would share a same landscape, a same water surface and a same sky.

Now, imagine that each of those village are in reality hosted on different domains. So from any of these villages, you won’t be affected by the content or the communication bandwidth of the other villages, each village having it’s own domain server.
Imagine also a super-structure that allows those places, hosted from different domains, to be under present in a same consistent world. We could call that a “super domain”.

A super domain offers some advantages:

Of course, this is a simulation. But this is good enough to seed in the user brain the idea that all those places are standing in a same world. 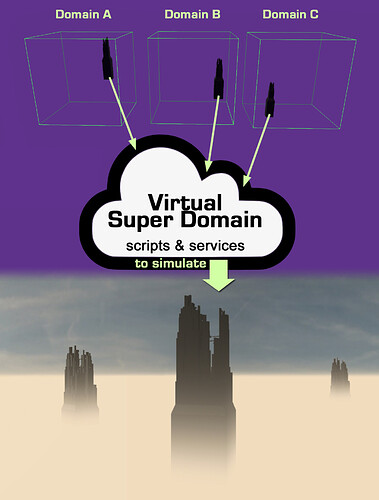 As a first phase of experimentation. I decided to keep it simple, also I used a simple concept without any walkable landscape.

Basically, each place is the tip of a very tall structure (looking as buildings) where the foundation is lost into a thick layer of fog. These “buildings” are the landscape part of the equation, basically the bedrock that you can build on.

As you can see, each building are visible from each other, even if they are located in different domains, and this is consistent from each of those places.

If you fly to another building, you will be move at a corresponding location on the other domain, discovering the same view, with the same sky, with the same neighbourhood.

Of course, you can’t see all the content from the other domains, only basic building models. You can understand what it would do if we were to render the content of 20 domains in a same one. But this trickery does induce the idea that all those places are standing in a same world.

This experimentation is only a proof of concept. Mainly regarding the overall mechanism, and the deployment of it.

Limited customization:
In this experimentation, a “building” can be customized on the material level only, by overriding the “.fst” file used on the model entity. The system won’t allow to change the model (there are validations if you try), but if you want it to be pink, you can make it pink using the material of the “.fst”, and your neighbourhood will see it pink too.

You can host your own skyscraper by joining the super-domain here:

In a next experimentation, the following things are planned to be addressed:

Loving the concept, and it works especially well with Skyscrapers popping out of the clouds. Have discussed this before with a few people but never had the time to play around with creating a POC.

It’d work as a very cool cyberpunk aesthetic. Would be cool to have Madders Place floating in the clouds with a mega simplified model, that then does full detail when get closer and TP’d to actual domain.

Also, this approach could technically make a world of any size by tying multiple super domains together that overlap. And any extremely large expanses between domains could be handled by serverless domains as part of the same structured world, which would reduce hosting requirements and costs.

I must now stop thinking about it, as I’ve a list of projects as long as my arm, and playing around with this would be too distracting